A high-fat diet (HFD) and excess energy intake adversely affect the health of humans and induce obesity, insulin resistance and hepatic damage [1,2]. Non-alcoholic fatty liver disease (NAFLD) is considered as one of the most common liver diseases. It is resulted by fat accumulation in the liver or steatosis followed by inflammation in the liver cells or non-alcoholic steatohepatitis (NASH), which could lead to fibrosis and finally cirrhosis [3]. NAFLD is mainly associated with insulin resistance. Insulin resistance increases glucose levels and causes adipocyte lipolysis that can induce hepatic steatosis and fatty liver [4]. Hepatic insulin resistance is mediated by partitioning of free fatty acids to the liver and by an imbalance of adipocytokines (decreased adiponectin and increased TNF-α) [5].

Glucose is a key fuel in mammals and it has to be transported from the circulation into target cells. The facilitative transporters (GLUT) utilize the diffusion gradient of glucose across plasma membranes [6]. Glucose transporter 4 (GLUT4) is encoded by the Slc2a4 gene and has a critical role in glycemic homeostasis. Binding of insulin to its receptor leads to translocation of GLUT4 to the plasma membrane and facilitates glucose uptake. Impaired GLUT4 expression has been related to insulin resistance [7, 8]. Expression of GLUT4 in the hyperglycemic liver is higher compared to the muscles [9] and expression of this transporter decreases in the liver of diabetic rats [10].

Propranolol (Prop) is a β-adrenergic receptor blocker. It has antioxidant and anti-inflammatory properties. Prop reduces intracellular Ca2+ and attenuates mitochondrial dysfunction. It is used traditionally for hypertension, myocardial infarction and cirrhosis [11]. Autonomic blockade improves insulin sensitivity [12]. Prop decreases hyperglycemia and increases GLUT4 expression in rats [7]. In the present study, we aimed to evaluate the effect of propranolol as a beta-blocker on high-fat diet-induced non-alcoholic fatty liver disease in Sprague–Dawley rats. For this study, biochemical parameters in plasma and liver were determined and histological analysis and hematoxylin and eosin (H&E) staining were performed. Following detection of GLUT4 protein expression was carried out by western blotting in liver tissue.

Male Sprague-Dawley rats (200 ± 20 g) were purchased from Razi Serum and Vaccine Institute Karaj, Iran. The experimental protocol was performed in accordance with the international guidelines established in the Guide for the Care and Use of Laboratory Animals (Institute of Laboratory Animal Resources, 1996) and further approved by the University’s Internal Ethics committee. Animals were kept in plastic cages at a temperature of 22-24 °C under a 12-h light/dark cycle. They were allowed free access to standard rodent chow and water. Animals were kept at the laboratory for one week. After adaptation, they were weighed and divided into the following three groups (n= 8 in each group): normal control group (NC), high-fat diet group (HFD), and HFD and propranolol group (HFD+P).

NAFLD was induced by a high-fat emulsion diet (HFD) as previously described [13]. HFD was prepared based on 77% of its energy from fat, 14% from total milk powder and 9% from carbohydrate [13]. In this emulsion, fat was provided by corn oil (shown in Table 1). HFD was administered to the rats once a day via oral gavage for six weeks.

At the end of the test and 14 hours after fasting, the animals were weighed and anesthetized by diethyl ether in inhalation way. Blood sampling was performed using a 5ml syringe from the heart ventricle. Blood samples were placed at room temperature and then serum was separated by centrifuge and kept at a temperature of -20 °C until analysis. The liver was immediately removed with caution, washed by normal saline and weighed. One part of the liver tissue was quickly isolated for Western blot analysis. It was submerged in liquid nitrogen and immediately stored at -80 °C until analysis. One part of the liver tissue was placed in 10% formalin buffer solution for histological evaluations. Other parts of the liver tissue were homogenized in a 50 mM phosphate buffer solution (pH = 7) and kept at -80 °C until the test time.

The activity of superoxide dismutase (SOD) was evaluated by measuring the percentage inhibition of the pyrogallol auto-oxidation by SOD according to the method of Marklund & Marklundand [16]. Malondialdehyde (MDA) was estimated by the method proposed by Buege and Aust [17]. The hepatic concentration of TC and TG was estimated after chloroform-methanol extraction according to Floch’s method [13].

Histological changes in liver tissues were detected by hematoxylin-eosin (H&E) staining as previously described [13]. Liver tissue was placed in 10% formalin solution for dehydration. After 48 h, paraffin was added to the tissue and staining was performed by H&E. The samples were cut into 5-µm sections according to routine protocols and examined by optical microscopy [13].

Western blot analyses were performed as previously described with some modifications [18, 19]. For western blotting, the tissue lysates were mixed with an equal volume of 2X Laemmli sample buffer. Quantitation of proteins was measured using the Bradford assay. Lysates (15 μg) were then subjected to SDS-PAGE after a 5 min boiling and subsequently transferred to a 0.2 μm immune-Blot™ polyvinylidene difluoride (PVDF) membrane (Cat No: 162-017777; Bio-Rad Laboratories, CA, USA). The membranes were then blocked with 5% BSA (Cat No: A-7888; Sigma Aldrich, MO, USA) in 0.1% Tween 20 for 1h. Then, the membranes were incubated with Anti-Glucose transporter type 4 (GLUT-4) (Cat No: ab654, Abcam) and anti-beta actin-loading control antibodies (Cat No: ab8224; Abcam) for 1h at room temperature. Subsequently, membranes were washed thrice with TBST and incubated with HRP-conjugated secondary antibody. The membranes were then incubated with enhanced chemiluminescence (ECL) for 1–2 min. Protein expression was normalized to β-actin. Densitometry of protein bands was performed using the ImageJ Version 1.44 software (NIH, USA), such that, the percentage area under the curve of each band was divided by the percentage area under the curve of its corresponding actin band, and then calculated values were compared between groups as we described previously [20].

One-way analysis of variance (ANOVA) was used, and the results were expressed as the mean ± SEM (standard error of the mean) followed by Tukey’s post-hoc test. The level of statistical signiﬁcance was set at p < 0.05. Experiments were replicated at least two times.

Induction of non-alcoholic fatty liver disease was established by feeding a high-fat emulsion diet and evaluated by H&E and transaminase activities. H&E staining displayed obvious fat droplets and macro-vesicular steatosis in liver sections of the HFD group. Liver histological changes were not observed in rats fed a normal diet. Liver transaminase activities (ALT and AST) were increased significantly in the HFD group compared with the NC group. Insulin resistance, hyperlipidemia, steatosis, transaminase activities and elevation of hepatic content of MDA in the animals showed the successful formation of a NAFLD animal model.

As shown in Fig.3, after six weeks of high-fat emulsion diet feeding, liver sections from the high-fat emulsion model group displayed obvious fat droplets and macro-vesicular steatosis in liver sections of the HFD group that was confirmed by H&E staining. Liver histological changes were not observed in rats fed a normal diet (Fig. 3A). Administration of propranolol attenuated the hepatic steatosis and fat droplets in the liver (Fig. 3B and 3C).

A high-fat diet and excess energy intake often cause oxidative stress that may be associated with various liver injuries and NAFLD [1,13]. In this study, oral administration of high-fat emulsion diet to rats induced oxidative stress, lipid peroxidation, steatosis and increasing in liver transaminase activities (ALT and AST). These results showed the successful formation of a NAFLD animal model.

Previous studies have indicated that sympathetic activation seems to influence the development of insulin resistance [23]. Autonomic blockade improves insulin sensitivity in obese subjects [12]. Stimulation of the β-adrenergic receptor inhibits both insulin-induced glucose uptake and autophosphorylation of the insulin receptor substrate. Phosphorylation of insulin receptors was inhibited by propranolol [24]. GLUT utilizes the diffusion gradient of glucose across plasma membranes. Propranolol increases GLUT4 expression and improves insulin sensitivity in rats [7]. In this study, a high-fat emulsion diet increased insulin resistance based on the HOMA index and serum insulin level. We found that propranolol (a non-selective β-blocker) significantly decreased insulin resistance and improved Hyperinsulinemia in the HFD+P group and it may play a role in the improvement of insulin resistance in NAFLD.

The plasma level of FFA is related to lipolysis and insulin resistance [25]. Patients with metabolic syndrome and NAFLD often have dyslipidemia [26]. Insulin resistance, due to ectopic lipid, increased hepatic de novo lipogenesis and hyperlipidemia [27]. Insulin resistance is associated with increased TG levels and LDL-C [28,29]. Propranolol increases GLUT4 expression and improves insulin sensitivity [7]. In our study, a high-fat emulsion diet increased the serum level of FFA, TC, TG, LDL-C, and decreased HDL-C, but the levels of these parameters were not decreased in treated groups compared with the HFD group. Our finding suggests that propranolol may reduce hyperlipidemia produced by insulin resistance.

The elevated serum AST and ALT are laboratory abnormalities in most patients with NAFLD. Adiponectin is decreased and TNF-α is increased in patients with NAFLD [3]. TNF-α is a key factor in insulin resistance and NAFLD. High TNF-α and low adiponectin levels are associated with insulin resistance [30]. Propranolol has antioxidant and anti-inflammatory properties [12] and improves insulin sensitivity [7]. In this study, a high-fat emulsion diet increased serum AST, ALT, TNF-α level and decreased adiponectin levels compared with the NC group, but in the treated group with propranolol, no significant change was observed compared with the NC group. Improvement of inflammation and insulin resistance by propranolol may play an important role in modifying the increase in liver transaminase activities (ALT and AST), adiponectin and decrease in TNF-α level.

Superoxide dismutase (SOD) is an enzyme, which disables oxidizing agents such as active oxygen species [31]. Oxidative stresses also cause lipid peroxidation and MDA formation [32]. Reactive oxygen species (ROS) such as anion superoxide are free radicals created as a result of oxygen cellular metabolism. It can attack lipids and unsaturated fatty acids in the cell and cause lipid peroxidation [4]. The result of these reactions is the production of compounds with a carbonyl group such as MDA. It can migrate and cause harmful effects on proteins and DNA in the cell [33]. MDA is a toxic compound that is considered as a marker for lipid peroxidation [34]. Propranolol has antioxidant and anti-inflammatory properties [12]. In the HFD group of this study, hepatic content of MDA increased and SOD activity decreased, but in the treated group with propranolol, no significant change was observed. These findings suggest that Propranolol reduced oxidative stress and lipid peroxidation that were produced by HFD.

The results of this study suggest that propranolol reduces insulin resistance, oxidative stress, and the level of serum and hepatic lipid profile in male Sprague–Dawley rats fed with a high-fat emulsion diet. Thus, it seems that propranolol may be an eﬀective drug for the improvement of insulin resistance, dyslipidemia and oxidative stress resulting from a high-fat diet and in the treatment of NAFLD.

The experimental protocol was performed in accordance with the international guidelines established in the Guide for the Care and Use of Laboratory Animals (Institute of Laboratory Animal Resources, 1996) and further approved by the University’s Internal Ethics committee (approval code: IR.IAU.SRB.REC.1397.122). Concerning Ethical Clearance, the protocol was approved by the Animal Ethics Committee of the Science and Research Branch, Azad University, Tehran.

The authors declare that they have no conflict of interest.

This research has been performed in the laboratory complex of the Science and Research Branch of Islamic Azad University of Tehran. 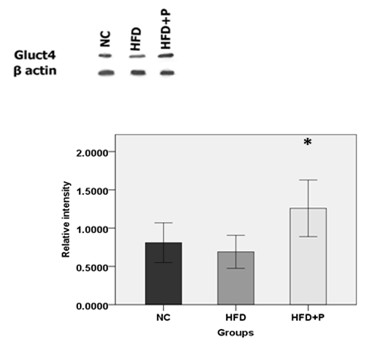