Does CD31 possess a role in patients with type 2 diabetes mellitus? a preliminary study

Diabetes mellitus (DM) is a common endocrinopathy seen in the general population. It is one of the fundamental wellbeing fears in developing countries and is a serious metabolic disorder that causes considerable disease and mortality with micro- and macro-vascular complications. Long-lasting diabetes is poorly controlled and often leads to nephropathy and cardiovascular complications. To a greater extent, studies indicate that T2D.M is a protracted inflammatory disease associated with the immune system. The present study was therefore aimed to investigate immune changes by evaluating the CD31 marker. Subjects were divided into two groups: healthy people (control group) and diabetic patients of type 2 (diabetic group). Our results showed a significant increase in CD31in the diabetic group, in comparison with the control group. Also, WBC and lymphocyte count significantly increased in the diabetic group in comparison with the control group. To sum up, the evaluation of CD31 showed a noteworthy increment in HbA1c of diabetics compared to the control group.

The incidence of diabetes in adults has been greater than before in recent years and is one of the utmost public disorders among metabolic diseases in the world [1, 2]. Diabetes Mellitus type 2 is a genetic disorder [3]. There are several genes elaborate, numerous of which have not yet been recognized. These genes normalize different chemical steps in the progress of β-cells, insulin secretion, and insulin production [4, 5]. A hormone insulin insufficiency is an over-all characteristic of all diabetic diseases[6]. For T2DM, the impedance of insulin action is also a problem. Insulin insufficiency is a complex condition that is not understood for certain possible causes. Here, we express what we understand today and explain that many of the concepts can alter, later. CD31 is termed as a cluster of differentiation. It is also named PECAM-1 for platelet endothelial cell linkage molecule. This plays an important role in eliminating old neutrophils from the body. Both neutrophil and macrophage express CD.31 on their tissues, and throughout the analysis course, these CD31 particles repair the two cells together [7].

CD31 is also expressed in certain tumors, including epithelioid hemangioendothelioma, epithelioid sarcoma-like hemangioendothelioma, other vascular tumors, histiocytic malignancies, and plasmacytomas. It is rarely found in some sarcomas and carcinomas.PECAM-1 is also highly expressed at endothelial cell intercellular junctions, where it functions as a mechanosensor, as a regulator of leukocyte trafficking, and in the maintenance of endothelial cell junctional integrity [8]. The mass of the microvasculature in the pancreas was resolute by the quantification of CD31, a marker of endothelial cells. Insulin management augmented CD31 protein levels, as well as the expression of VEGF and VEGFR2 [9].

In immunological histochemistry, CD31 is used principally to prove the incidence of endothelial cells in histological tissue sections. This can help to evaluate the degree of tumor angiogenesis, which can imply a rapidly growing tumor. Similar immunohistochemistry-based investigations, quantitative assessment of vascularity in tissue segments, might be influenced altogether by varieties in approaches including counteracting agent choice, techniques for antigen recovery (AR), and strategies for vessel thickness appraisal. Immunohistochemical recoloring of microvessels to survey microvessel thickness (MVD) per unit region is related to the level of intratumor neovascularization, tumor metastatic capacity, and visualization for patients with numerous kinds of human strong malignant growths. There are a few immunohistochemical markers that can distinguish endothelial cells including antibodies that perceive epitopes on CD31 [10].

Flow Cytometry Standards were designed to describe both cellular characteristics (sizes, membrane potential, intracellular pH), and cellular content amounts (DNA, protein, surface receptors, calcium). Measurements, which detect the allocation in cell populations of these parameters are crucial in biotechnology [11]. Furthermore, flow cytometers can be integrated with the sorting unit, which shows that the sub-population selected can be separated. The majority of the sorting units are set to fracture the cell stream to droplets. The cells are electrically charged before droplets become formative. The resulting droplets are passed through an electric field into a collection vessel [12].

Human CD31 having a place with the immunoglobulin superfamily and expressed by endothelial cells, platelets, monocytes, and polymorphonuclear cells, just as by discrete populaces of flowing lymphocytes [13]. CD31 purposes as a union receptor molecule, playing a key role in WBC trafficking across the endothelial layer. Various reports have shown that CD31 may take part in homophilic (CD31-CD31) and heterophilic (CD31-X) ties to other cell surface or network proteins [14].

The study was primed at the Clinical Pathology Department, Faculty of Medicine, Minia University. It was conducted on twenty newly diagnosed diabetic patients and twenty healthy individuals as control.

Two groups were under fasting conditions for ten hours before collecting the lipid profile sample.

Patients were subjected to a full assessment of the following;

Blood glucose was determined by using a glucose kit purchased from SPINREACT Company, Egypt commercially available kit according to the instruction of the manufacturer.

It included the count of white blood cells (total) and the percentage of lymphocytes. It was determined by an automated hematology analyzer, CELLTAC G (NIHON KOHDEN CORPORATION).

Hemoglobin A1C (HbA1c) was determined using the HbA1c kit purchased from SPECTRUM Company, Egypt commercially available kit according to the instruction of the manufacturer.

This preliminary study depends on the ability of unequivocal monoclonal antibodies to fix to the antigenic determinants expressed by leukocytes. Explicit staining of the leukocytes was executed by incubating the section with the CD31-FITC reagent. The red cells were earlier isolated by lysis and the leukocytes, which were simple by this procedure, were investigated by flowcytometry. The flowcytometer quantifies light dispersion and the fluorescence of cells. The fluorescence of the delimited cells was concentrated to separate the positive recolored occasions from the unstained ones. The results were communicated as a level of positive occasions opposite all the occasions acclimatized by the gating.

Whole blood was collected in evacuated tubes containing EDTA, For each sample, two tubes were prepared labeled 1&2 (Control and Test, respectively), 10 μL of specific CD31-FITC conjugated antibody was added to each test-tube, and 10 μL of the isotopic control to each control tube, then 100 μL of the test sample was added to both tubes, the tubes were gently shaken then incubated for 15 to 20 minutes at room temperature (18 – 25°C) in the dark. The cells were washed by PBS twice to remove any unbound antibodies followed by red cell lysis using 2 ml of lysing solution then incubated for 10 min at room temperature in the dark. After that, the cells were centrifuged for 5 min, the supernatant was discarded and 2 ml of PBS was added then wash by PBS was repeated twice, then the cells were re-suspended in 3 ml of PBS for final flow cytometry analysis.

The statistical exploration was implemented by Statistical Package for Social Sciences (SPSS Inc. Chicago, IL, V 21.0) and (Graph Pad software V 16). Quantitative variables were expressed by mean ± standard errors (SE). In all tests, a P-value of less than 0.05was considered statistically significant. Comparisons of the results between the two methods were done using One Way ANOVA Test with P-values < 0.05 followed t-test was used for comparison of the means. 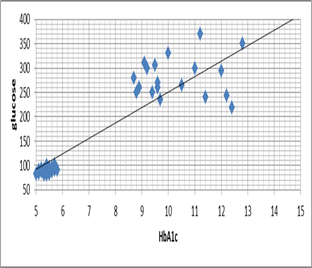 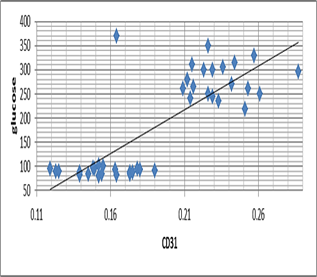 Besides, the expression of the adhesive molecules in T2DM is increased. Platelet activation (CD31, CD49b, CD62P, and CD63) is increased in patients with T2DM in comparison to healthy individuals. In healthy subjects, acute hyperglycemia, which is demonstrated by elevated surface level (P-selectin and CD40 ligand) and soluble markers (sP-selectin), leading to higher platelet activation and reactivity [18].

The WBC and diabetes mellitus are linked with the outcome of higher inflammatory mediators. Inflammatory agents, insulin, and human blood constituents are key signals for all anomalies that lead to invasion and inflammation of other agents [19]. There is a relationship between the average number of WBC and diabetes mellitus because of expanded inflammatory mediators. These along with insulin, and human blood segments structure for any variations from the norm, bringing about the invasion by unfamiliar agents and additionally inflammation. Numerous reasons can convince protection mechanisms and add to changes in levels of blood boundaries, including mean white cells, mean platelet count, and phagocyte rate. [20] The available biological data have strongly suggested that T2D is an inflammatory disease [21].

The inflammatory process within the diabetes is mediated by proinflammatory cytokines, reactive oxygen species, growth factors, and metalloproteinase; these are produced from leukocytes (neutrophils, lymphocytes, and macrophages) infiltrating the renal tissues. The homing of leukocytes into renal tissues is probably mediated by intercellular adhesion molecule-1 and the chemokine’s CX3CL1 and CCL2 and this process explains the increase of lymphocytes percentage in T2D [22].

Some of the limitations of the work were a model magnitude, as larger trials will produce additional noteworthy outcomes. The lack of preceding work was another limitation as there was only one previous study, and supplementary effort will unearth noteworthy consequences in the forthcoming. To sum up, we investigated that a close relationship exists between type2 diabetes mellitus and CD31.

This research has been funded by the authors.

All measures accomplished in this scientific trial containing human supporters remained in similarity through the ethical principles of the institutional advisory group.

This is a Ph.D. proposal venture. The authors do not report any money-related or individual associations with different people or associations, which may contrarily influence the substances of this publication or potentially guarantee origin rights to this paper.

We would like to show our gratitude and appreciation to Dr. Alaa Elmetwalli, Egyptian Liver Research Institute, and Hospital, for sharing his pearls of wisdom with us and collaboration in writing that greatly improved the manuscript.