The neural innervations of the upper limb allow many options for neural blocks that can be tailored to the desired level of anesthesia of the limb. The trunks and divisions of the brachial plexus are relatively close as they cross over the first rib, so the onset and quality of anesthesia are nearly fast and complete. This helped increase the popularity of the supraclavicular approach of BPB for surgeries below the shoulder [5].

Brachial plexus block using local anesthetics alone ensures good operative conditions but still has a shorter duration of postoperative analgesia. Hence, many adjuvants such as morphine [6], magnesium [7] and clonidine [8], have been added to local anesthetics in BPB to achieve fast, intense, and prolonged block; however, the results are either not conclusive or linked with side effects [9].

Nalbuphine is a 14-hydroxymorphine derivative with an agonist-antagonist effect that acts on µ (mu) receptors as an antagonist and as agonist on κ (kappa) receptors with an analgesic strength parallel to morphine while its antagonistic activity is approximately ¼th of that of naloxone. Nalbuphinehas a ceiling effect on respiratory depression not as morphine. The use of perineuralnalbuphinein brachial plexus block has shown the potentiality to extend the sensory block duration and to decrease the total analgesic consumption [10].

Perineuraldexamethasoneis thought to relieve pain via local suppression of inflammatory mediators release and also ectopic neural discharge in the nociceptive C-fibers [11]. It has been shown that the duration of postoperative analgesia could be augmented when dexamethasone is given as an adjunct for peripheral nerve blocks [12].

This prospective,double-blinded, randomized, controlled clinical trial was performed in Zagazig University Hospitals within the period from December 2018 to November 2019. A total of 90 patients undergoing elective below shoulders upper limb surgeries under ultrasound-guided Supraclavicular BPB were enrolled in the study. The details of the procedure were demonstrated to each patient, followed by informed consent from the patients. Patients included were aged between 21 and 60 years old, of both sexes with BMI between 18.5 and 29.9 kg/m2 and classified by the American Society of Anesthesiologist (ASA) as Class I–II. Patients with pathological coagulopathy, peripheral neuropathy, infection at the injection site or allergy to any of the studied drugs were excluded from the study.

During the preoperative visit, the visual analog scale (VAS) with ten centimeters grading (0 – no pain and 10 – worst pain imaginable) was explained to the patients. All the patients were kept fasting for about 6 hours before the procedure. An intravenous line was secured and supplemental oxygen was administered at 4 L/min through a nasal cannula. Procedural sedation had been provided using midazolam 0.01 up to 0.1 mg/kg intravenously [13]. Standard ASA monitors such as electrocardiogram, non-invasive blood pressure, and pulse oximeter were connected to the patient and baseline measures were recorded. All equipment for resuscitation were at hand and ready.

Patients were then specified randomly into three equal groups each of 30 patients using computer-generated tables:

Ultrasound-guided supraclavicular BPB was performed using an 8 to 12 MHz linear ultrasound probe (Mindray M5-Shenzhen MindrayBiomdical electronics co., LTD) placed in a sterile sheath and using the in-plane technique. The patient was kept in a supine posture with the head tilted to the opposite side of the block and after recognizing the brachial plexus at the first rib, lateral to the subclavian artery (Fig.1), skin infiltration with lidocaine 1% was done then a sterile blunt Stimuplex50 mm needle 22-gauge (B. Braun, Melsungen, AG) was directed toward the angle between the subclavian artery and first rib. Then, the anesthetic mixture "32 ml "was injected ensuring spread in the corner pocket of the plexus sheath.

Primary outcome parameters were the duration of analgesia, the total opioid consumption in the first 24 hours postoperative and duration of the motor block where secondary outcome measures were the onset of sensory and motor block and drug-related complications such as pruritus, nausea, vomiting, and sedation.

Duration of analgesia was designated as the time from the onset of sensory block to the first complaint of postoperative pain at the surgical site that had VAS ≥ 4, motor block duration was designated as the period from the onset of a motor block to the recovery of the hand or wrist mobility and was determined by asking the patients to record the exact time when they could first move the fingers of a blocked hand.

Vital signs including heart rate, blood pressure, respiratory rate, and oxygen saturation were monitored throughout the surgery. Side effects as pruritis, nausea, vomiting, sedation or pneumothorax were documented. Postoperative pain was assessed at a 1-hour interval for the first 8 hours, then every 4 hours up to the end of the first 24 hours after the procedure.  When rescue analgesia was required (VAS ≥4), fentanyl 25 μg intravenous increments were administered to the patient as needed up to 200 μg/hour [14]. The total dose of fentanyl in the first 24 hours postoperative was recorded for analysis.

One hundred and fifteen patients (115) were enrolled to participate in this clinical study, 8 patients were precluded from the study due to failure to achieve a complete block within 30 minutes and general anesthesia was conducted to complete the surgery as needed, 7 patients refused to participate, while 10 patients did not meet the inclusion criteria (Fig.2). All groups were comparable according to their demographic data including age, height, sex, weight, BMI, ASA classification and period of surgery (Table 1). Perioperative hemodynamics; heart rate, blood pressure, peripheral oxygen saturation, and respiratory rate were also comparable between the studied groups.

This study was done to assess the efficacy of combining dexamethasone with nalbuphine to bupivacaine 0.25% for BPB regarding the beginning of sensory and motor block, duration of motor block and postoperative analgesia, the total fentanyl consumption in the first 24 hours and any associated complications.

Regarding the onset of sensory block, there was no statistically significant difference among the groups. While the onset of motor block was shorter in bupivacaine 0.5% group than other groups. These results referred that neither dexamethasone nor nalbuphine can hasten the onset of block. These results are in agreement with the results of Das et al. and Gupta et al. [9, 15] in their studies on nalbuphine as an adjuvant to bupivacaine0.5% in BPB. Also with the results of Parrington et al.[16] in their study on dexamethasone added to mepivacaine in supraclavicular BPB.

However, Chiruvella et al., [17] in their studies evaluating the analgesic effect of nalbuphine with bupivacaine in BPB found that it significantly shortened the onset of sensory and motor block. Biradar et al. [18] also showed that the onset of both motor and the sensory block was shorter in the dexamethasone group in their comparative study of combining dexamethasone to lidocaine in BPB.

The duration of analgesia was extended in the dexamethasone plus nalbuphine group together with the least fentanyl consumption in the first 24 hours. This was highly statistically significant when compared to bupivacaine 0.25% alone. Ghanem et al. [19] found also that combining epidural dexamethasone with intrathecal nalbuphine could prolong the duration of analgesia in lower abdominal surgeries. These results are in alignment with the meta-analysis done by Huynh et al. [12] to evaluate the effect of mixing dexamethasone with a local anesthetic on peripheral nerve blocks in adults, also with the results of Gupta et al. [15] and Das et al. [9]. Nazir& Jain [20] and Abdelhaq et al. [10] also gave the same result with nalbuphine but with larger dose "20 mg" than our study "10 mg".

Comparing bupivacaine 0.5% group"B" with dexamethasone plus nalbuphine group "M", both extend the postoperative analgesia with no statistically significant difference between them. However, group M characterized by earlier recovery of motor function with much less opioid consumption. This is clinically beneficial in postoperative rehabilitation following orthopedic surgeries, which require early mobility to avoid joint stiffness and so, guarantee better surgical results and less hospital burden.

The mechanism of the analgesic effect of perineural nalbuphine can be attributed to various factors also such as the possible existence of peripheral opioid receptors permitting for the analgesic effects of opioids [21]. Also, opioids could exert local anesthetic action via the closure of sodium channels embedded in the nerve membrane [22]. At last, perineural nalbuphine analgesia can be referred to as its systemic absorption [23].

The mechanism of dexamethasone's influence in extending the analgesia period is not yet clear and is believed to be related to many factors. Possible explanations refer to some sort of vasoconstriction which could decrease the absorption of local anesthetics [24], others suppose that the suppression of the synthesis and release of the inflammatory mediators could interrupt the transmission of pain signals in the unmyelinated C-fibers [11, 25].

From the results of our study, we can conclude that the addition of 10 mg of nalbuphine hydrochloride with4 mg of dexamethasone to bupivacaine 0.25% in brachial plexus block has the advantages of extending the duration of postoperative analgesia and reducing postoperative opioids requirements while preserving early recovery of motor function when compared to bupivacaine 0.5%.

The authors declare no conflict of interest. 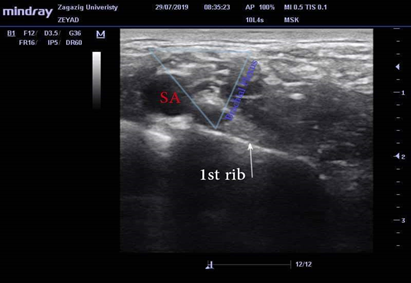 Figure 1: Ultrasound image of the brachial plexus in the supraclavicular area, SA stands for the subclavian artery. 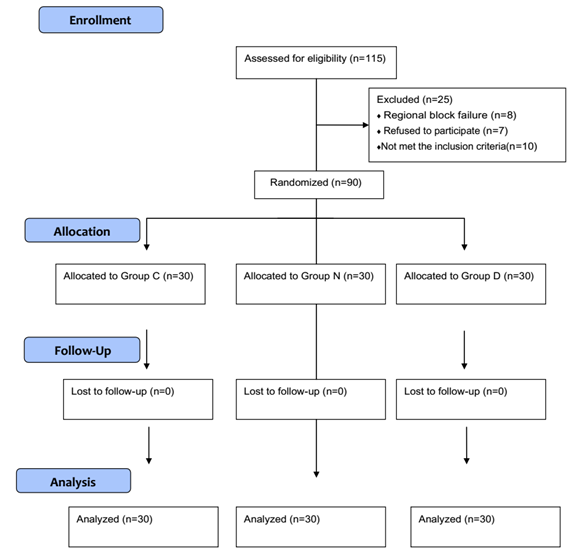 b; comparison between Bupivacaine 0.25%  and Dexamethasone + Nalbuphine group.